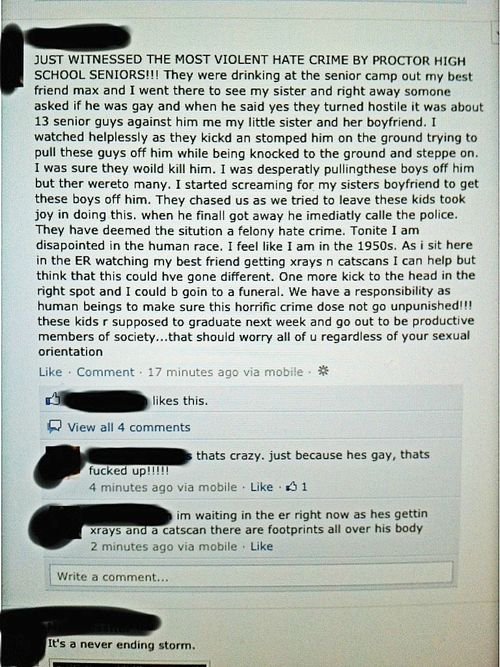 Two teens, ages 18 and 19, are currently being held in custody at the St. Louis County Jail after what witnesses says was a homophobic assault by possibly more than 9 others, many high school seniors, at a graduation party near Duluth, Minnesota.

Max Pelofske, 21, of Duluth, said he came to a party at the pit to offer his congratulations to a friend’s sister, who will graduate from Proctor High School in several days. The friend, Kelly Johnson, also 21, said she and Pelofske had been at the unsanctioned gathering of about 50 people, mostly current and former Proctor students, for about five minutes when a boy approached her and Pelofske.

“He told me to look him in the eyes, and I was really confused because I’d never seen the guy before,” Pelofske told the News Tribune. “He asked me: ‘Are you gay?’ And I said, ‘Yes. Is that OK?’ ”

After that, Pelofske said he was struck in the head by a flying beer can, and a crowd of boys surrounded him, threw him to the ground and began punching and kicking him.

“I tried to get up, but I kept getting knocked back down,” said Pelofske, who described his alleged assailants as “all laughing and smiling.”

“They were trying to throw me into the fire,” he said.

Johnson said at least nine boys were involved in the attack.

“I thought they were going to kill him,” Johnson said, estimating that the beating went on for five to 10 minutes. She said she tried to intervene but was pushed away. “I was screaming, ‘Just let us leave!’ ”

Another senior claims Pelofske instigated the attack by stealing drinks from people:

Johnson refuted that account, saying Pelofske was attacked by a large group, not a single individual, and never attempted to fight back or to throw anything at anyone. She also said that she and Pelofske had been at the gathering only five minutes or so and had consumed no alcohol. She said they both asked for breath tests when police arrived to document they had not been drinking.

Pelofske was released from the hospital Sunday morning with bruised ribs, a swollen face, and foot marks all over his back and legs.

Police have not yet said whether they're classifying it as a hate crime:

“After they’re arraigned and charged, the assault charge should show whether it’s a crime of bias,” Sgt. Brent Donahue of the St. Louis County Sheriff’s Department told the News Tribune. “It’s an open investigation at this point.”

The 19-year-old in custody is being held on pending charges of assault in the fourth degree — which is a crime of bias, Donahue said — and possession of marijuana. The 18-year-old’s pending charges are unknown.

A Facebook page has been set up for Pelofske and a rally is planned.

Watch a rather inadequate report from Northland News Center, AFTER THE JUMP…