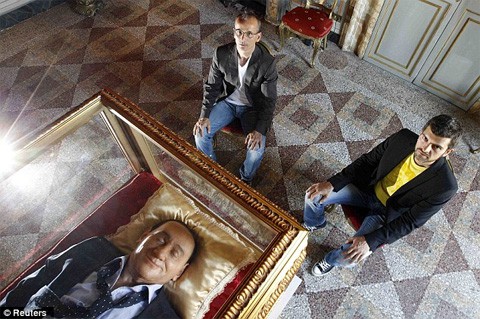 Antonio Garullo and Mario Ottocento, who are described as the first-ever married gay couple and tied the knot in Amsterdam in 2002, have created a new artwork which is being displayed in a shrine at the Ferrajoli Palace, close to the Palazzo Chigi, the official residence of Italian prime ministers, ANI reports:

The name of the installation refers to what Berlusconi apparently called himself on the phone to one of his girlfriends, according to Italian media. The former prime minister, who is still very much alive at 75, is seen smiling as he lies in a glass coffin with his eyes closed. Bizarrely he is wearing giant Mickey Mouse slippers as he lies on a satin pillow in a double-breasted blue jacket. There is also one hand inside his unzipped trousers while the other hand rests on the History of Italy.

Positioned in a shrine at the Ferrajoli Palace, the shocking installation is available for all Italians to see and is just yards from Berlusconi's former stomping ground, the Palazzo Chigi, the official residence of Italian prime ministers.

Said Garullo and Ottocento to the UK's Daily Mail tab: "We put Berlusconi’s body into a glass case to emphasise the personality cult that he has been creating for all these years and which will possibly remain for years to come. At the same time we put a screen between the contingent reality and historical judgment. If Italians are ultimately ''a people of saints, poets, seafarers'' then the arch-Italian Silvio is a worthy simulacrum of this people."

Previous Post: « Latina Lesbian Mary Gonzalez Wins Primary, Will Become Only Out Gay Lawmaker in Texas
Next Post: Andrew Rannells: ‘I am Gay in Real Life’ »