A Norwegian court is hearing testimony in the case of Anders Behring Breivik, who killed 69 people on Utoya island and eight more in an Oslo bombing last year: 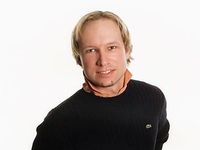 Two of the 33-year-old's friends gave evidence at the court in Oslo in which they described the right-wing extremist as obsessed with how he looked. Four friends were due to testify in the trial today and a statement from Breivik's mother, Wenche Behring, will also be read out.

One of the friends said he thought Breivik was depressed or was a closet homosexual after he moved back in with his mum in 2006, Dagbladet newspaper reported.

The witness said, "I think they had a more friendly relationship than a mother and son normally have."

The court also heard Breivik had nose surgery so he could have a more "Aryan" nose. Breivik claimed he had the surgery because he was attacked by a Pakistani man, but the former friends said they could not recall the attack. He also used powder on his face.