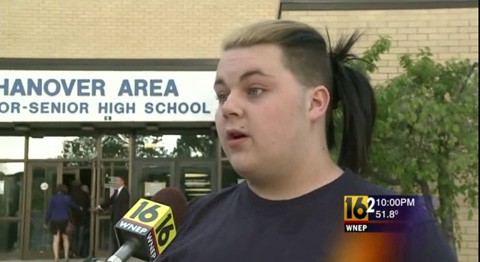 Jared Swank, a senior high school student in Hanover, Pennsylvania, says he was mocked by a teacher who shared a video she took of Swank and his transgender prom date to other students, WNEP reports:

Swank, 18, said his senior prom over the weekend was a memorable one. The openly gay student at Hanover Area High School said he and his transgender female date enjoyed dancing the night away, but on Monday he said his prom experience took an ugly turn.

“I went to prom. One of the teachers took a video and put it on the whiteboard here at school and other students saw it and made comments,” added Swank.

Jared’ s mom said he has been bullied since eighth grade and this alleged incident was just another example.

“It hurt him, it hurt him. He was embarrassed, he was chastised. As a matter of fact, we just came from the gas station to get a drink before we got here and some of Hanover Area students yelled out the window, ‘(expletive).’ So that’s what it’s done. It’s antagonized more bullying,” said mother Dawn Mendygral.

The motivation behind the teacher’s showing the video is unclear.

Video may take a short period to load.

Previous Post: « President Obama, Gay Marriage, and a Thank You to Mom
Next Post: Obama Says He Wasn’t Angry at Biden for ‘Jumping the Gun’ on Gay Marriage Endorsement: VIDEO »