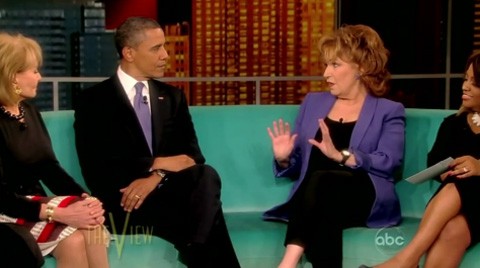 Here's another clip from Obama's appearance on The View (via Politico) in which Joy Behar asks Obama if he was angry at Biden for "jumping the gun" on his same-sex marriage evolution with his remarks on Meet the Press three days before Obama's announcement.

"I was OK with it because it came out of a generosity of spirit. You know, when you get to know Joe Biden, he is the most honest, straightforward guy…We talked about it and what I said was I’m never gonna blame anybody for telling what they believe because I think it’s important for everybody in my administration to feel like we want to be disciplined, we want to make sure we're getting the message out there, but at the same time, on issues of principle … to go ahead and speak their minds.”