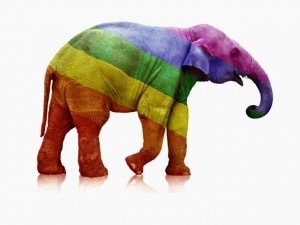 Not sure how this memo leaked, but I'm glad it did. It was dispatched yesterday from the desk Jan van Lohuizen, the respected Republican pollster and founder of Voter Consumer Research, and was destined for the desks of various Republican "insiders" and operatives. Here's the text:

1. Support for same sex marriage has been growing and in the last few years support has grown at an accelerated rate with no sign of slowing down. A review of public polling shows that up to 2009 support for gay marriage increased at a rate of 1% a year.  Starting in 2010 the change in the level of support  accelerated to 5% a year.  The most recent public polling shows supporters of gay marriage outnumber opponents by a margin of roughly 10% (for instance: NBC / WSJ poll in February / March: support 49%, oppose 40%).

2. The increase in support is taking place among all partisan groups. While more Democrats support gay marriage than Republicans, support levels among Republicans are increasing over time.  The same is true of age: younger people support same sex marriage more often than older people, but the trends show that all age groups are rethinking their position.

3. Polling conducted among Republicans show that majorities of Republicans and Republican leaning voters support extending basic legal protections to gays and lesbians.  These include majority Republican support for:

Recommendation: A statement reflecting recent developments on this issue along the following lines:

“People who believe in equality under the law as a fundamental principle, as I do, will agree that this principle extends to gay and lesbian couples; gay and lesbian couples should not face discrimination and their relationship should be protected under the law.  People who disagree on the fundamental nature of marriage can agree, at the same time, that gays and lesbians  should receive essential rights and protections such as hospital visitation, adoption rights, and health and death benefits.

Follow up to questions about affirmative action: “This is not about giving anyone extra protections or privileges, this is about making sure that everyone – regardless of sexual orientation – is provided the same protections against discrimination that you and I enjoy.”

Conservative fundamentals: “As people who promote personal responsibility, family values, commitment and stability, and emphasize freedom and limited government we have to recognize that freedom means freedom for everyone.  This includes the freedom to decide how you live and to enter into relationships of your choosing, the freedom to live without excessive interference of the regulatory force of government.

Andrew Sullivan, writing at The Daily Beast, thinks the memo is a rather big deal. He writes, only a little melodramatically:

The last paragraph is, to my mind, the most remarkable. It's advising Republican candidates to emphasize the conservative nature of gay marriage, to say how it encourages personal responsibility, commitment, stability and family values. It uses Dick Cheney's formula (which was for a couple of years, the motto of this blog) that "freedom means freedom for everyone." And it uses David Cameron's argument that you can be for gay marriage because you are a conservative.

And the walls came tumbling down.