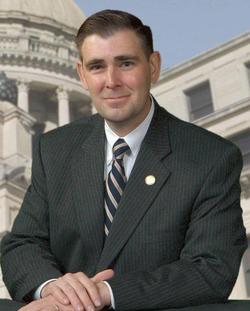 "If a man has sexual relations with a man as one does with a woman, both of them have done what is detestable. They are to be put to death; their blood will be on their own heads," the scripture, the infamous Leviticus 20:13, reads. The lawmaker also said gay people spread disease.

As the news spread, Gipson, who is also a Baptist minister, tried to do some damage control, but to no avail, and the story soon went national and now Gipson claims he and his family are receiving death threats.

He also released a statement in which he again tries to plead his case:

Since [my posting], a well-known radical liberal blog (The Huffington Post) ran an article falsely claiming that this Facebook post was a call "to kill gay people." Nothing could be further from the truth. I have never publicly or privately called for the killing of any people. I believe all people are created in the image of God and I stand firmly for the sanctity of all human life. All people are entitled to protection of the laws of our nation and state protecting human life.

Any reasonable person who reads the actual post can see that both scripture were cited only for the proposition that same-sex marriage is morally objectionable — sin. I believe this reflects the values of the vast majority of Mississippians and the people of District 77 whom I represent.

Maybe that familiarity theory of gay rights isn't quite right.

Previous Post: « Student Can Wear ‘Jesus Is Not A Homophobe’ Shirt
Next Post: Gay X-Man Northstar’s Wedding To Be Announced On ‘The View’? »