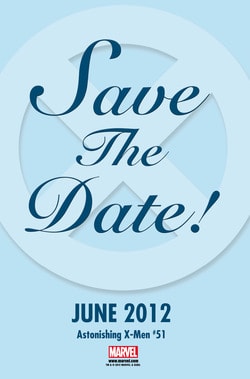 Despite the fact that we all know that gay X-Man Northstar will soon marry his boyfriend, publisher Marvel has remained cagey on the details.

That will most likely change tomorrow, because the ladies of The View will be making a "major Marvel announcement" that "will have everyone talking," Bleeding Cool reports.

Meanwhile, DC Comics publicity veep Courtney Simmons spoke to ABC News about their "reintroduction" of a known character as gay and said the hero will be "iconic."

“One of the major iconic DC characters will reveal that he is gay in a storyline in June,” she said.

This lends some credence to speculation that the new gay hero will be Superman from Earth-2. Yeah, there are parallel worlds and parallel Supermen. It's a comic book, so they can get away with it, but DC had better not go too far. We know all what happens then.

As for the recent spate of gay characters in comic books, Matt Kane from GLAAD remarked to ABC: “DC and (archrival) Marvel are recognizing that there is an LGBT audience that has been reading their comics for years. When creating these fictional worlds it’s important to show the full diversity.”

Previous Post: « MS Lawmaker Who Said Gays Spread Disease Tries To Explain Himself
Next Post: Protest Planned Against NC Pastor Who Would Round Up and Kill Gays and Lesbians »