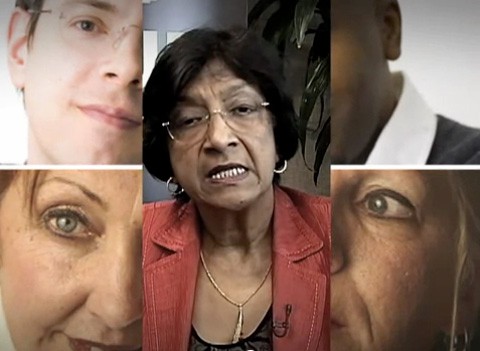 UN High Commissioner for Human Rights Navi Pillay, who in December directed world governments today to end abuse based on sexual orientation and curtail criminalization of homosexuality, talks about the human cost of homophobia and transphobia in a powerful new video released this week.

All over the world, lesbian, gay, bisexual and transgender people of all ages face harassment and discrimination — at work, at home, at school and in many other everyday situations.

In many countries, national laws are skewed against them. In some 76 States, having a partner of the same sex is a criminal offense. People are being arrested, singled out for physical attack, being tortured, even killed – just for being in a loving relationship.

When I raise these issues, some complain that I’m pushing for “new rights” or “special rights” for lesbian, gay, bisexual and transgender people. But there is nothing new or special about the right to life and security of person, the right to freedom from discrimination. These and other rights are universal … enshrined in international law but denied to many of our fellow human beings simply because of their sexual orientation or gender identity.

We cannot let these abuses stand. We know what needs to be done. States must repeal discriminatory laws and ban discriminatory practices: punish violence and hatred … not love.

And we should all challenge homophobic attitudes. The best antidote is education – for children and adults alike. Reach out. Talk. Learn. And help make our world safer and better for everyone.

This is an historic moment: more and more States recognize the need for action and are speaking up – including here at the United Nations. With your help and the support of millions of people who believe in universal human rights, we will secure equal rights for every last one of us.