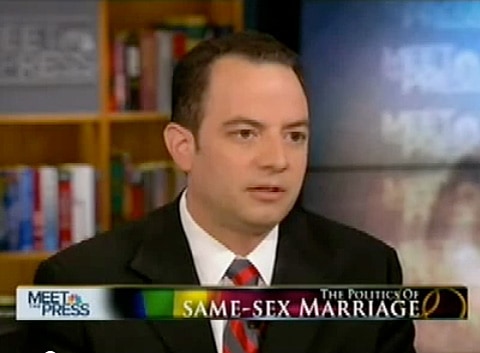 I’m not sure if it’s going to be a defining issue, but clearly for people in America – where gay marriage is their number one issue, we clearly have two candidates with two different views. On one hand, you’ve got Barack Obama who is now, I guess, going to promote and perhaps crusade for this issue. And you have Mitt Romney who’s been consistent and I think in line with most Americans – which is that marriage ought to be defined between one man and one woman. So, for those people that this is their issue, they have a clear choice.

Asked if he believes it's a civil rights issue:

“I don’t think it’s a matter of civil rights. I think it’s just a matter of whether or not we’re going to adhere to something that’s been historical and religious and legal in this country for many, many years. I mean, marriage has to have a definition. And we just happen to believe it’s between a man and a woman,” Priebus said NBC’s "Meet The Press."

“People in this country, no matter straight or gay, deserve dignity and respect. However, that doesn’t mean it carries on to marriage."