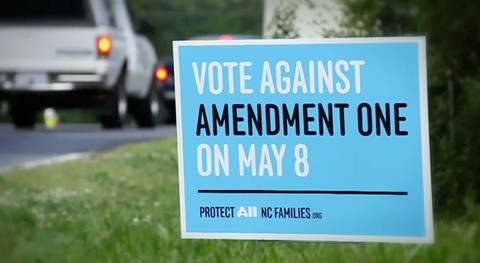 Voters hit the polls tomorrow and Protect All NC Families has released its final ad in support of the campaign to defeat Amendment One in North Carolina.

Check out the final ad, 'Rise Up' and share it with everyone you know, AFTER THE JUMP… 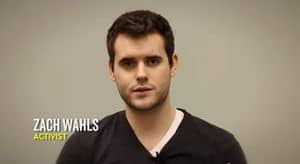 It features Bill and Chelsea Clinton, Zach Wahls, Clay Aiken, Governor Beverly Perdue, Ben Jealous, and dozens of other citizens who have spoken out against the discriminatory measure.

On a conference call last night, organizers of the campaign to defeat Amendment One reported that $910,000 had been raised online from over 7,000 donors over the duration of the campaign.

Said campaign manager Jeremy Kennedy: “In less than 48 hours we will know the result of this election. In December we had no staff, today we have over 30. We raised more than $2.5 million over the course of this race which many people doubted that we could ever achieve.”

In recent days, the campaign has seen the NAACP come out against Amendment One, making a $50,000 ad buy. A robocall from President Bill Clinton began running over the weekend.

Add the organizers: "We are extremely proud of the campaign that we have ran and we believe that we have an opportunity for an upset along the lines of personhood in Mississippi. Going into election night they believed that they were going to lose miserably, based off of strategists we have spoken with, and we now believe that we can achieve similar results. The turnout number is historic through early voting and we believe that this campaign is 50/50 going into election day."

Check out the final ad, 'Rise Up' and share it with everyone you know, AFTER THE JUMP…

The amendment is likely to pass 55% to 41%, according to a poll released last week by Public Policy Polling, a Democratic-leaning group in Raleigh. But those numbers have been narrowing and amendment opponents say they are optimistic, especially since the poll found voters are less likely to support the amendment when they understand it could affect benefits for all unmarried couples, gay and straight, in part because it says "marriage between one man and one woman is the only domestic legal union that shall be valid or recognized."