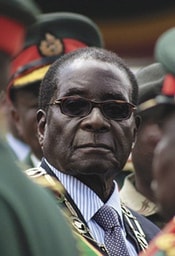 Not content with being just a standard homophobe, Zimbabwean President Robert Mugabe claims that gay people are not welcome in his country because they deprive a woman of the opportunity to have children.

"Mothers were given the talent to bear children. That talent doesn't belong to men," Mugabe said at a women's HIV/AIDS human rights conference in Harare.

"When a man says he wants to get married to another man, we in Zimbabwe don't accept it. We can't talk of women's rights at all if we go in that direction. It will lead to extinction."

He and Charles Worley would have a lot to discuss.