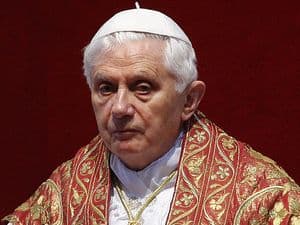 One week ago, Italian journalist and TV star Gianluigi Nuzzi released a book called His Holiness: The Secret Papers of Pope Benedict XVI, which became an instant-best seller in Italy's bookstors and seriously angered the Holy See. It was a tell-all, delivering the goods on Catholic fiscal impropriety, the covering up of Catholic fiscal impropriety, priestly boyfriends, and the headaches of dealing with the endless rolling scandal that is the American Catholic Church. Notably, the Vatican hasn't denied the book's authenticity, though it does claim its publication was illegal.

Nuzzi had been releasing his Catholic dirt and dribs and drabs for a year on his television show, The Untouchables, causing a rising tide of panic in the Vatican. And the information unearthed got weirder and uglier with every episode. By May, his spelunking in the oubliettes of Catholic rumor and secrecy had caused the Italian police to exhume the body of a feared mobster who'd been (for some uncertain reason) buried in the Holy See, right next to the Opus Dei HQ. In the mobster's tomb, police hoped to find the remains of a 15-year-old named Emanuela Orlandi who went missing three decades ago, perhaps because her dad had some dirt on a Cardinal. (Many bodies were found in the tomb; DNA testing ought to reveal whose they are or aen't sometime soon.)

Well — when His Holiness came out, His Holiness decided he wasn't going to stand for Nuzzi's prying any longer. He bid three of his toughest Opus Dei goons to stop all Vatican leaks immediately. Which they did. The presumed leaker has been identified. He was Pope's butler and personal attendant, Paolo Gabriele.

Paolo Gabriele, 46, was arrested Wednesday for illegal possession of confidential documents, found in his apartment in Vatican territory, the Vatican said in a statement Saturday.

Gabriele, who has worked as the papal butler since 2006, is one of only a handful of people with access to the pontiff's private desk.

His job included handing out rosaries to dignitaries and riding in the front seat of the "Popemobile," a vehicle used for public papal appearances, as seen in many photographs showing Gabriele with the pope.

Elsewhere in the story appears maybe the most frightening line of prose I've read this week:

Gabriele is being held in a special cell within the Vatican City, a walled enclave within Rome …