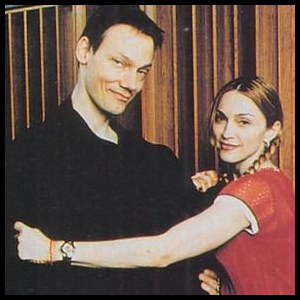 Minor Madonna drama: Producer William Orbit, who worked with everybody in the 80’s (Cocteau Twins! Sting!) and co-created the Ray of Light album with Madge, posted an audio recording of his original, guitar-centric cut of that album’s title track to YouTube last week. A discussion of Madonna broke out on Orbit’s Facebook page, with one fan noting that the promotional strategy for Madonna’s new record, MDNA, seemed strangely … nonexistent.

Orbit then posted this long, illuminating, and rather sad statement:

I appreciate your analysis of the album release ‘strategy’ @Madonna Express Yourself. I wasn’t involved in its formulation in any way myself. All I will say is that certain thoughts about it that I see expressed online by committed fans such as yourself, were blindingly obvious to me from the very get go, well before the release. But I’m no Jimmy Iovine, with the ability to advocate my convictions forcefully, and as co-producer, co-writer etc am aware that it is not in my ‘job spec’.

But you won’t see me exactly jumping up and down with delight over the way that things have panned out. We were very pushed for time, due to a rather interesting and shall we just say, ‘traditional’ method of recording that the esteemed engineer Demo was partial to, and various pressing commitments that took up the artists limited time, such as perfume ranges and teen fashion contests and other such endeavours which are beyond my own limited understanding of pop star agendas.

The recording sessions for the six songs I did were hugely enjoyable for all of us. M was on form and better than ever with her singing and writing and musicality, and was having a great time. We had songs lined up that were breathtaking. You’ll hear some of them on Chris Brown’s new album, and they are the best ones, Kreayshawn’s (INCREDIBLE) new album, my own recently completed ‘Strange Cargo’ album. And some other surprising places. SNAPPED up by the artists concerned. Most of them, I believe, destined to become classics (let me know in a couple months wether you concur with that)

The team I assembled in NY for MDNA were, and are as good as it gets now. Writers and musicians and performers I picked because they take my breath away with their talent. And are totally of-the-moment in everything good that is going on in contemporary music at the moment. And usually hard to book because they are so in demand. And all of us fully committed to putting ourselves through extraordinary efforts to make MDNA the greatest album of the year.

But alas, the time wasn’t there. Great swathes of it taken up by the engineer and his assistant bouncing reverb tracks for hour after hour, night after night. Not to real tape or anything, where you could posit that there would be an advantageous sonic dividend (real tape can be magic) but all in the digital domain. A purely procedural thing. Although not a procedure I or any of my own colleagues in this game would want to squander time with.

I was just describing to a friend of mine, and whom I frequently work with Serban Ghenea (just look him up if you want to be awed) how it was done, and he thought I was kidding him!

There. I’ve said it. I did try to say it earlier but I must have not made the point with enough push, my way being to always say it with the music itself.

Over the years it’s become obvious to me that along with Madonna being the greatest pop artist of ALL time, her fan base are also the most ardent, cohesive, discerning and loyal fan base of any artist. Not saying that to blow smoke, is quite obviously true. Big respect. And long life to us all. And as you look at things in a ‘long term’ way (my way also) you always call it like you see it. And I’m with you on that too. Be honest and true, speak your heart and mind, and let the dust fall where it will.

So basically, i’d lie down in the mud if she didn’t want to get her shoes messed up (well, figuratively speaking, neither of us does a lot of Glastonbury mud tramping) it’s hard to be an effective knight when your hands are bound. I will submit to wisdoms that are possibly beyond my comprehension and that will play out to glory in the fullness of time. And get back to my own fervent canvas, and speak no more of the matter.

Oh, and if some bright spark at marketing central suggested a Hilary Clinton approach, ie, press ‘restart’ and get back in the studio for a couple weeks and do what they nowadays call a ‘re-pack’, I’d certainly put my hand up for that, whatever else I had going on. But realistically, there is only one person that could make that happen. And with the best songs in the world, and the best mixing, best ProToolsing, best team, best lyrics, best bananas, after this little screed I don’t suppose I should while away my hours staring at the phone!

But i feel better for saying all that. Debt free and not beholden. The thing about having little appetite for riches and fame, and no great tower of expectations, you haven’t got anything to be taken away. And having always been an outsider, outside in the cold, It’s always clear which way the wind is blowing. I was never inside any bubble long enough to forget how the wind blows, and changes, and ebbs and gusts, and dies away completely. As before a storm. And that a beautiful bubble might yield to even a the breeze from a humble fan.

The MDNA comments. I should not have said them publicly. I see that and I regret that I said online. Not fair to M.

The upside to it all is that Orbit posted that fantazamazz version of “Ray of Light,” in which Orbit’s lead guitar just scorches. Especially during the extended coda. Madonna doesn’t sound like a solo pop singer on this record; she sounds like the lead singer of a brilliant pop-rock combo. Have a listen AFTER THE JUMP …