It looks like the federal judiciary is celebrating Pride Month one day early. 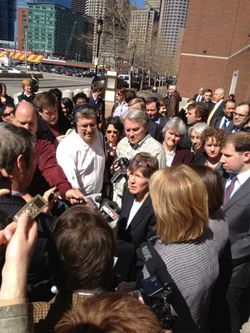 Today, a unanimous panel of three First Circuit judges declared the Defense of Marriage Act (DOMA) unconstitutional. We have discussed the companion cases of Gill v. Office of Personnel Management and Massachusetts v. OPM before, most notably when District Judge Joseph Tauro started a judicial juggernaut against DOMA in 2010. At the time, his razor sharp reasoning — that DOMA violated equal protection and the Tenth Amendment — offered a blueprint for sister courts to follow; today, his view is one of many, both inside the courtroom and out in the court of public opinion, where DOMA's popularity is at an all-time low.

Like the Ninth Circuit's decision in Perry v. Brown, the First Circuit's decision offers appellate court precedent — far more impactful than a single (or three) district court decision(s) — for legal conclusions that impact all gay rights cases, from the appropriate standard of review to the role of Congress's state rationales for antigay laws.

But, while Gill may have rightfully condemned DOMA as odious and discriminatory, today's decision is an incomplete victory for two reasons. Despite the powerful arguments from the Obama Administration, the First Circuit declined to apply heightened scrutiny to DOMA or to any state action that discriminates on the basis of sexual orientation. Also, the court declined to find evidence of Congressional animosity toward gay persons as a sufficient reason for invalidating the law.

At the same time, it properly discards the Baker v. Nelson canard that conservatives use to this day, accepts the discrimination that gay Americans have faced and continue to face, and tears gaping holes in the antigay arguments of the Republican House. Today's decision was a great lesson in appellate law, the power of the impact litigation approach to civil rights, and a welcome statement on the morality and truth behind our cause. 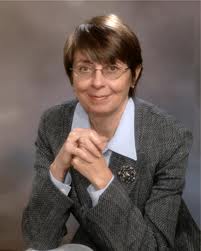 Chief Judge Sandra Lynch (the first woman to serve on the First Circuit and a Clinton appointee – pictured, right), Michael Boudin (a George H. W. Bush appointee), and Juan Torruella (a Puerto Rican jurist appointed by President Reagan) all agreed that DOMA violates the Equal Protection Clause. President Obama and many gay rights scholars wanted the court to come to that conclusion by using "heightened scrutiny," or a form of judicial review that would invalidate most laws. Heightened scrutiny requires a law have a substantial connection to an important government interest. The alternative — "rational basis review" — would affirm most laws because all a law's proponents would need to show is some rational connection to a legitimate government interest. Legitimate interests abound, important motives are harder to come by (as is a stronger connection between the law and the goal).

The First Circuit chose the Solomonic path, splitting the difference between rational basis and heightened scrutiny, choosing what we teach in law school as "rational basis plus."

The Court found that it was foreclosed from declaring that heightened scrutiny was the appropriate standard of review because a different three-judge panel of the same court had said that rational basis was the right standard (Cook v. Gates, 2008). Cook was a case about the long-gone "Don't Ask, Don't Tell" policy, but the constitutional challenge to that law required the court to determine the proper standard of review for laws that discriminated on the basis of sexual orientation. In a classic example of respect for precedent and judicial modesty, the Gill panel refused to challenge its predecessor panel despite ample rationale to do so. For one thing, in Cook, the Bush Administration argued that rational basis was appropriate; in Gill, President Obama — through my accomplished friend Stuart Delery at the DOJ — made air-tight arguments for the need for heightened scrutiny.

In any event, rational basis plus is somewhere between the lowest, highly permissive standard of review that courts generally give economic legislation and the strict heightened standard of review. It comes from a trilogy of Supreme Court cases – U.S. Department of Agriculture v. Moreno (1973), City of Cleberne v. Cleberne Living Center (1986), and Romer v. Evans (1996) — that found that where a law is aimed at a traditionally unpopular or disadvantaged group, though not a group traditionally given strict scrutiny (i.e., racial, religious, alienage minorities), courts have to use a more searching form of review than they give to your everyday law. 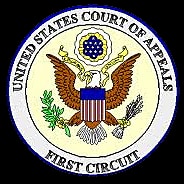 By adopting this in-between standard, the First Circuit may have denied us the heightened scrutiny we deserve, but it did at least one important thing: it destroyed the underlying rationale of Judge Randy Smith's dissent in Perry v. Brown. Judge Smith refused to find Prop 8 unconstitutional because he thought the public's good faith, yet misguided reliance on lies and false science still qualified as a rational connection to the various stated government interests. Assuming that tortured logic is even correct, it is only possible under the most permissive rational basis standard. And, the First Circuit has said definitively that such a standard has been foreclosed by the Supreme Court in cases involving historically disadvantaged groups.

The court also found that the federalism concerns counseled in favor of this more searching form of review. If you recall, Judge Tauro also declared DOMA unconstitutional under the Tenth Amendment: Congressional intrusion into marriage law, an area traditionally and exclusively reserved to the States, marked an overreach of federal power. The First Circuit declined to go that far. The court recognized that marriage law falls under the state umbrella, but Congress certainly has an interest in what the states define as a marriage. After all, that is what Gill is about, that is, the various interests, in the form of federal benefits, that the federal government has in marriage. What's more, the Supreme Court has made clear that federal laws only violate the Tenth Amendment where Congress sought to commandeer state governments or dictate the internal operations of a state. Since DOMA still allows states to recognize marriages for gay couples, DOMA does not run afoul of the Tenth Amendment.

However, DOMA does burden states. In the Gill companion case, Massachusetts argued that DOMA could force it to lose Medicaid funding if it recognized same-sex spouses for Medicaid purposes, thus either imposing huge financial burdens on the state or forcing them to break state law and deny marriage recognition to gay couples. The First Circuit simply says that these burdens do not violate the Tenth Amendment, and my reading of the Tenth Amendment cases suggests it is correct. DOMA does not force Massachusetts to do anything directly; it certainly has an impact, but more is needed to run afoul of the Tenth Amendment. That conclusion is also notable as we prepare for a groundbreaking Supreme Court ruling on the Affordable Care Act, one of President Obama's signature legislative achievements. Even though DOMA does not violate the Tenth Amendment, these federalism concerns further support the more searching form of review of rational basis plus.

With this standard, the court dismantles many of the Republican House's arguments in favor of DOMA. A pro-traditional marriage rationale cannot stand because DOMA neither favors opposite-sex marriages nor stops same-sex marriages. Any financial or administrative burdens are either speculative or insufficient to justify discrimination against gay persons. The supposed "best parents" argument falls because DOMA cannot stop gay couples from adopting children. And, per one of the few clear statements of law in Lawrence v. Texas (2003), moral disapproval of homosexuality can never be a legitimate rationale for a law.

But the First Circuit made clear that in declaring DOMA unconstitutional, it was not relying on evidence that DOMA's primary, but hidden rationale was hostility toward homosexuality. After all, Lawrence said that wanting to uphold a traditional institution is not the same as bald hostility to the excluded group. For much of this country's history, tradition and morality had been legitimate bases for laws and only the last few decades has questioned that tradition. So, when it comes to the role of morality and tradition, the First Circuit was aware of the law — Lawrence foreclosed the legitimacy of the morality argument — but it was uneasy. This should give us pause. Blanket statements about morals, family, and tradition have been used by conservatives to bury gay persons under mountains of discriminatory laws; they are also used by pundits and ideologues as rationales for far harsher treatment. Today, many of our legal victories rest on the victories of our predecessors, who exiled conceptions of morality from legitimate justifications for discriminatory laws. If courts are uneasy about that rule, we may have to redouble our efforts to cement our success.

Today's victory brings us one step closer to the final end of DOMA, something the First Circuit admits will have to be left to the Supreme Court. It also shows us the impact that every gay rights decision has on each other, from Gill to Cook to Perry. Each victory bleeds into other areas, breeding victory upon victory. That may be the greatest reason to continue the impact litigation path, blazed by Lambda Legal, Gay and Lesbian Advocates and Defenders, the ACLU, the American Foundation for Equal Rights, and others.