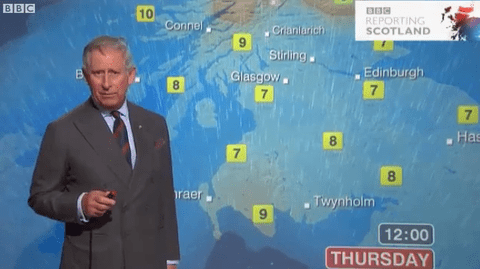 Prince Charles was recently invited to view the taping of BBC Scotland’s lunchtime show Reporting Scotland. Rather than just standing on the sidelines, however, Charles decided to get before the camera and deliver the weather.

Against a backdrop of the BBC’s weather map, Prince Charles delivered a specially written script which included references to royal residences in Scotland.

Looking directly into the camera, he said: “The best of the bright and dry weather will of course be in the northern isles and the far north of the mainland. So, a little hazy sunshine for the Castle of Mey in Caithness.

“But a cold day everywhere with temperatures of just 8C and a brisk northerly wind. Thank God it isn’t a bank holiday.”

He did a bang up job, as you’ll see AFTER THE JUMP…