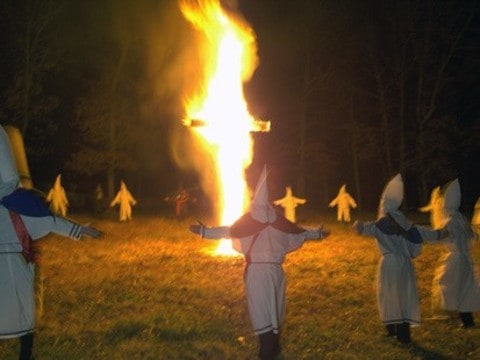 The Ku Klux Klan in Georgia garnered plenty of headlines last month when it announced plans to "adopt" a stretch of Union County highway, meaning that they would be responsible for keeping it neat and tidy.

Most people were naturally uncomfortable over the idea of a known hate group lending their name to a public road, and the KKK's application was subsequently rejected. Now the group has enlisted the ACLU to represent them in a lawsuit against Union County, and they may just have a case.

From the Atlanta Journal Constitution:

A likely precedent was established in 2005 when a federal court ruled that Missouri had no right to ban the KKK from the Adopt-a-Highway program based on the Klan's political beliefs.

"Yes, we are representing them, but we are still working on the strategy," she said Tuesday afternoon.

Seagraves said the Klan reached out to her organization last week after the DOT struck down its application to participate in the statewide highway cleanup program.

The Department of Transportation said they denied the Klan's request because they only let "civic-minded organization[s] in good standing" participate in the Adopt-a-Highway program. Being hatemongering racists apparently does not qualify as civic-minded. Who knew?!