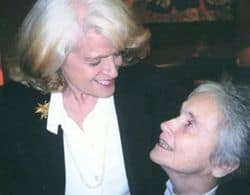 Here's what our legal expert Ari Ezra Waldman wrote about the case, which was filed by the ACLU, back in 2010, before marriage equality had passed in New York:

The ACLU and Paul Weiss are bringing the case of Edie Windsor, the 81-year-old widow of Thea Spyer, subject of the documentary, Edie and Thea: A Very Long Engagement, and who was forced to pay $350,000 in estate taxes on Thea's estate upon her death because the federal government did not recognize that the two were married. Had DOMA Section 3 not been on the books and Edie enjoyed federal recognition of her marriage, Thea could have passed her entire estate to Edie tax free.

This case is out of New York, which does not have marriage equality, but recognizes same-sex marriages legally performed elsewhere. That only slightly changes the legal landscape, but not in any significant way. Suffice it to say, Edie's and Thea's marriage was legal in New York, and while they received state benefits, they received no federal benefits and were subject to the federal estate tax. Because they weren't married in the eyes of the federal government, which permits estates to pass from spouse to spouse upon death tax free, Edie was treated differently than similarly situated heterosexual couples simply because Edie is a lesbian and married a woman.

The ACLU is asking for a declaration that DOMA Section 3, as applied to Edie via the IRS code, is unconstitutional. Edie is seeking her $350,000 back from the government.

Wrote Jones in the opinion:

Regardless whether a more "searching" form of rational basis scrutiny is required where a classification burdens homosexuals as a class and the states' prerogatives are concerned, at a minimum this court "must insist on knowing the relation between the classification adopted and the object to be attained. The search for the link between classification and objective gives substance to the equal protection analysis. Additionally, as has always been required under the rational basis test, irrespective of the context, the court must consider whether the government's asserted interests are legitimate. Pursuant to those established principles, and mindful of the Supreme Court's jurisprudential cues, the court finds that DOMA's section 3 does not pass constitutional muster.

Previous Post: « Boy Scouts to Review Policy on Gays
Next Post: Gay Airman Randy Phillips Reflects on the 20-Something Generation and HIV While on AIDS/LifeCycle Ride: VIDEO »