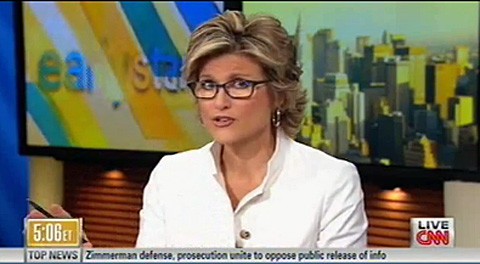 CNN's Ashleigh Banfield attempted to clarify remarks that she made yesterday following a segment about Kansas Pastor Curtis Knapp, who believes the government should kill gay people, Mediaite reports.

In her remarks, Banfield called homosexuality a "voluntary lifestyle choice", but on her CNN newscast today, she said that wasn't what she meant at all.

I made some comments yesterday that ended up getting a lot of traction out there, not only on Twitter but elsewhere. And I want to be very, very clear about what my comments were about. I probably misspoke and mangled words, but I want to be very clear.

When I said that incest and pedophilia involve people who don’t have a choice — victims who don’t have a choice — and then said a gay relationship, you do have a choice, they are not crimes. Gay people involved in relationships are not committing any crimes at all. However, those who perpetrate incest and perpetrate pedophilia are committing crimes. I don’t know that my comments were taken in that light and I certainly hope they were, but in no way did I ever want to suggest that being gay is a choice. It is not. And I probably used the word “lifestyle choice” — not what I meant to say at all. Being gay is not a choice; being in a voluntary gay relationship is a choice. It is not a crime. So I hope that at least clears up any of the comments I made after that story of the pastor. And in no way do I agree with or stand by any of the comments that that pastor made either.

Watch Banfield try to correct her statement, AFTER THE JUMP…