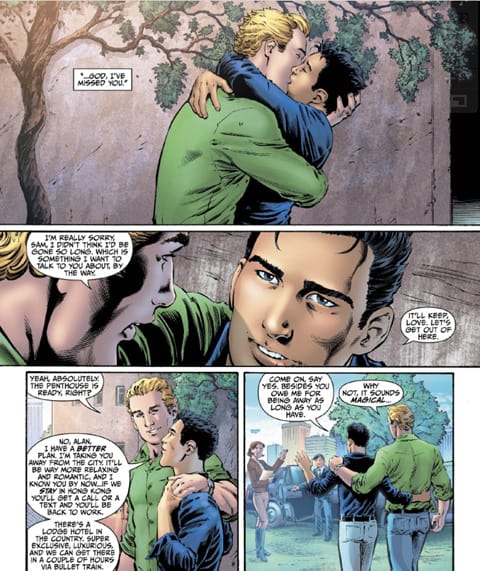 DC Comics outs Alan Scott aka the original Green Lantern, who is currently appearing as a character in its Earth 2 series.

Read the full 4-page preview, AFTER THE JUMP… 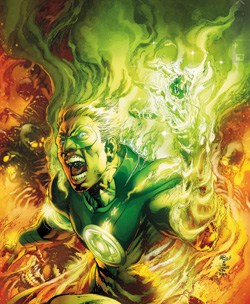 Entertainment Weekly speaks with writer James Robinson about the coming out:

The original version of Alan Scott was an older man, and he had a superpowered son, Obsidian, who was gay. The fact that Scott was young now [thanks to a universe-wide reboot] meant Obsidian no longer existed. I thought it was a shame that DC was losing such a positive gay character. I said, “Why not make Alan Scott gay?” To Dan DiDio’s credit, when I suggested it to him, there wasn’t a moment’s hesitation.

[The Alan Scott character is] a giant of the media industry. By getting involved in communication, the news, and the Internet, he’s become a billionaire. He’s kind of a cross between Mark Zuckerberg and David Geffen. The original Alan Scott owned a radio station in the ’40s and ’50s, so he was a media giant then. He was this bold, heroic, brave man who took control, who would risk his life for you and be this emerald knight that was always there to protect the world. The Alan Scott I’m doing now is that same dynamic, brave, honorable man. A man that you’d want guarding your welfare, your children, your life, your home. He’s willing to give his life for the world. He’s everything you want in a hero. And he happens to be gay. So really, apart from his sexuality, there isn’t that much of a difference.

Read the full 4-page preview, AFTER THE JUMP…