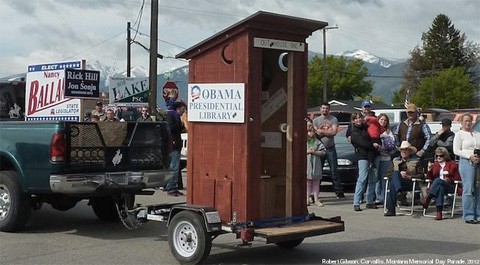 The Montana GOP Convention took place over the weekend and failed presidential candidate Newt Gingrich was the featured speaker on Saturday. Getting as much attention as Newt's appearance, however, is this "Obama Persidential Library" — a bullet-riddled outhouse on a trailer — which was placed outside the convention venue, Missoula's Hilton garden Inn, The Missoulian reports: 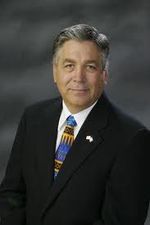 Nothing on the outhouse indicated who was responsible for it, although it made an appearance in the Memorial Day parade in Corvallis in Ravalli County. The outhouse was painted to look as though it had been riddled by bullets.

Inside, a fake birth certificate for Barack Hussein Obama made reference to the disproven controversy over the president’s origins. It was stamped “Bull––.” A graffito advised “For a Good Time call 800-Michelle (crossed out), Hillary (crossed out) and Pelosi (circled in red.)”

State GOP Chairman Will Deschamps (pictured) of Missoula said he didn’t know who’d brought the outhouse, but dismissed it as “a sideshow.” – “It’s not something I’m going to agonize over,” he said. “Some of that stuff is not real good taste. We do have a president of the United States, and we have to honor that.”