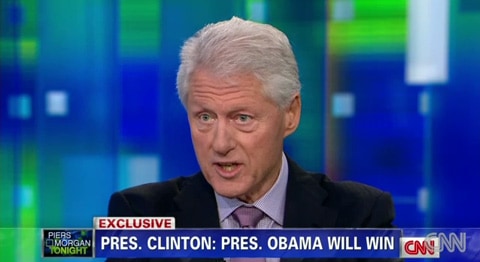 Bill Clinton appeared on CNN's Piers Morgan Tonight broke from Democrats and the Obama campaign, which have both been attacking Romney's record at Bain Capital, and called that record "sterling" while speaking assuredly of an Obama win in November:

On Thursday, Clinton said Romney's record at Bain was less important than his ideas for the country.

"I think the real issue ought to be, what has Governor Romney advocated in the campaign that he will do as president?" Clinton said. "What has President Obama done and what does he propose to do? How do these things stack up against each other?"

Clinton said there was no question Romney was capable of performing the "essential functions of the office."

"The man who has been governor and had a sterling business career crosses the qualification threshold," Clinton said.