To celebrate Pride 2012 and to honor the great civil rights and political successes we have earned recently, I would like to offer a series of columns on the lawyers, advocates, scholars, and individual leaders who have sacrificed so much, developed novel legal arguments, and won the legal victories upon which we stand today. It is impossible to include everyone; an entire life's work would fail to honor all of our forefathers. But these few representatives symbolize the contributions of the greater whole: a group of men and women, young and old, who have sacrificed so that we can live a life of freedom today. Today, the men of faith.

The conventional wisdom is that faith is the enemy of gay equality. But, although few days go by without this or that pastor condemning gays in the name of God or calling for unspeakable horrors against us in His name, faith itself can be an ally in our quest for honor and equal treatment. 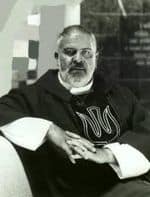 Some of this nation's greatest liberal icons — William Jennings Bryan, Martin Luther King, Robert Kennedy — were either deeply religious or used the language of religion to reach the people. Today, there are men and women of faith who are vocal supporters of gay rights, many of whom have taken their cues from religious leaders like the Reverends Troy Perry (right) and Brent Hawkes of the Metropolitan Community Church (MCC) and the Reverends John V. Moore and Cecil Williams of Glide Memorial Church in San Francisco. These men and their religious orders have not only made waves advocating on behalf of LGBT persons, but they have also put the weight of faith behind opposition to Prop 8, DOMA, and Don't Ask, Don't Tell; in support of students' rights to identity-affirming expression in schools; and in support of marriage recognition legislation in New York, Maine, North Carolina, and other states.

Troy Perry founded the MCC in Los Angeles in 1968 as a place where gays could come together, pray, and explore their relationship with God. While Rev. Perry's sermonizing was described as rather conservative, he started performing same-sex marriages as early as 1970 and began ordaining women pastors in 1972. Brent Hawkes is probably the most famous LGBT pastor in Canada; he served as head of the MCC in Toronto since 1977 and was the catalyst behind Canadian recognition of same-sex marriages. As pastor of Glide Memorial Church in the early 1960s, John Moore delivered a series of groundbreaking sermons on Christianity and sexuality in which he advocated a progressive rapprochement between gays and people of faith. When Cecil Williams became Glide's pastor in 1963, he doubled down on Glide's liberal Christianity, welcoming gays and affirming their membership in the community of man, not to mention reaching out into the Tenderloin district of San Francisco to aid an impoverished population. 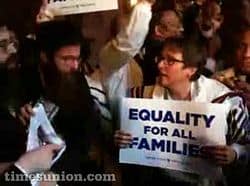 On the shoulders of these men stand people like happy warrior Rabbi Sharon Kleinbaum (right), Senior Rabbi at Congregation Beit Simchat Torah (CBST), the gay synagogue in New York; Rabbi David Greenberg, who came out in 1999 while serving as an Orthodox rabbi; the incomparable Randy Roberts Potts, the openly gay grandson of Oral Roberts who recently married his long-time partner and has served as a strong link between the gay and religious communities; and the outspoken Father Bob Pierson, a gay Catholic priest, who argues that it is the Catholic thing to do to vote against bans on gay marriage. But, more than that, these religious trailblazers for equality offer us an emotional and linguistic link to a community of potential allies and a wealth of compelling arguments in favor of LGBT honor, equality, and acceptance.

When Troy Perry founded the MCC, he was one of the first to see a demand for a community of gay worshippers. Rev. Hawkes, Rev. Perry's and the MCC's Canadian champion, was so fed up with not being able to solemnize gay marriages in Toronto that in January 2001, he performed a same-sex wedding in defiance of the law. He was Canada's Gavin Newsom, leading a revolution that ended much more happily. After Rev. Hawkes performed the marriage, the Toronto city clerk's office refused to register it. The lawsuit that followed affirmed the marriage and eventually declared the common law definition of marriage as "invalid to the extent that it refers to “one man and one woman." (Halpern et al. v. The Attorney General of Canada), thus opening the door to full marriage equality in Ontario. And, the leaders of Glide have created one of the most open, progressive, and celebratory houses of worship that brings together all individuals in the name of peace, love, and equality. An important tenet of Glide's community belief is LGBT equality.

This leadership and bridge-building is of singular importance, second only to exercising power where it counts. To that end, religious groups from many faiths have come together to file amicus briefs against the Defense of Marriage Act and against Prop 8. In their brief in Gill v. OPM, the First Circuit case that recently declared DOMA unconstitutional, for example, we see the importance of religious dialogue and religious allies.

To persons of faith, DOMA's definition of valid marriages for the purposes of federal law discriminates against those faiths that would define marriage differently. Whereas Gill's attorneys and the Department of Justice argued that DOMA fails a constitutional test because it treads on powers traditionally and exclusively left to the states and because it treats similarly situated individuals simply because of their sexual orientation, the amicus brief from our religious allies argued that DOMA departed from the federal government's traditional neutrality among various religious definitions of marriage, enshrining one — a particularly conservative and arguably ahistorical Judeo-Christian definition — as the only federal definition of civil marriage. In this way, DOMA violates the Constitution's ban on the establishment of religion, or the favoring of one religious doctrine over another. 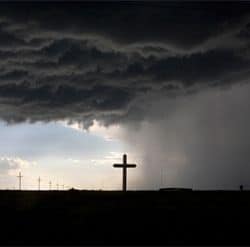 This novel legal argument complements the moral weight and access brought by religious allies. We often find that our quest for equality takes us across religious territory and we shy away from those engagement all too often. The campaign against Prop 8 in California was decried for its anemic religious outreach, as were other campaigns. Granted, many religious houses spout hateful invectives against the gay community; but, it is also liberal reticence to engage in the language of morality, values, and piety that push our leaders to give up finding religious allies before they even try. After all, the libertarian language of freedom and rights is the balliwick of progressives. We feel most comfortable when discussing our right to do this or our freedom from that. But, true equality and honor for gay persons requires more than that. It requires that we dive into the language of values and morality and prove that our lives and marriages are worthy of state recognition.

Here's why: If marriage and equality were truly only about rights and freedom, we would be content to take government out of our lives entirely, to not only let us love in private, but to get out of the business of consecrating marriages and protecting workers. Our cause is not to argue that government should leave us alone, but that we deserve full inclusion in a society that our government is there to protect and foster. To make that argument in a country whose institutions have strong Judeo-Christian roots requires us to prove the moral worth of gay persons, not the moral depravity of government.

Perhaps leaders like Perry, Hawkes, Moore, Williams, Greenberg, Kleinbaum, Potts, and Pierson can be beacons and bridge-builders. Perhaps we learn from their example and reach out to our friends of faith, making them essential allies in our quest for liberation.

Postscript: In full disclosure, I am not a religious person. I grew up in an observant Jewish home, the son of a clergyman, and my rather complicated relationship with organized religion has removed faith as a force in my life. What I write here today is not so much dependent on a deep understanding of God and religion, but rather on the role the language of faith can play in our quest for freedom.