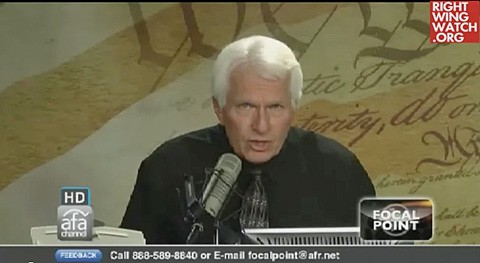 American Family Association mouthpiece Bryan Fischer wants conservatives to "reclaim" the term "discrimination", riffing on a piece he wrote last week, arguing they should "dust it off, and use it without apology," Right Wing Watch reports.

In the piece, Fischer wrote:

Public policy is about discriminating against behaviors that are socially destructive and corrosive to the social fabric. So, we rightly discriminate against people who rip off convenience stores, burgle houses, drive while drunk, eat the faces off homeless people, gun down servicemen on military bases, embezzle funds from employers or clients, or beat their wives…

Watch him riff on that, AFTER THE JUMP…

Previous Post: « You Don’t Know How Much I Love This: VIDEO
Next Post: A ‘Real Housewives of New Jersey’ Character Comes Out as Gay: VIDEO »