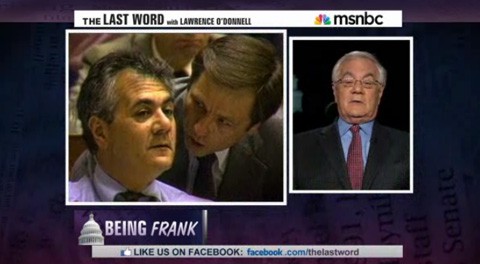 Lawrence O'Donnell spoke with Rep Barney Frank (D-MA) 25 years to the day that he came out publicly while in office:

"I look back kind of nostalgically to a degree of bipartisan encouragement I got then that sadly I couldn't count on today."

Frank also condemns the "child abuse" he sees in the video of the Indiana church where a child was applauded for singing "No Homos Gonna Make It to Heaven", but notes that those people are diminishing.

Frank also talks about his upcoming marriage and the effect that same-sex marriage has had on the places where it has been legalized: "It immediately becomes non-controversial".