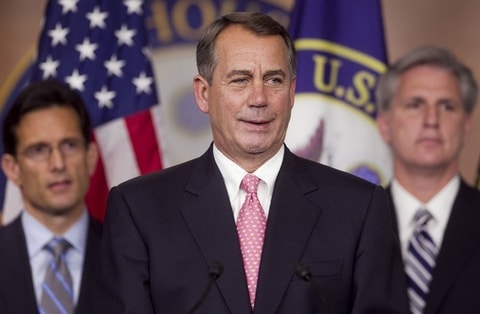 As expected, Rep. John Boehner and his fellow Republicans on the GOP-controlled House Bipartisan Legal Advisory Group petitioned the Supreme Court today to rule on a First Circuit Court's decision that the Defense of Marriage Act violates the Constitution.

In a filing obtained by Metro Weekly, BLAG asks the Supreme Court, which must agree to consider the case, to take the appeal for three reasons: (1) the constitutionality of DOMA Section 3 is "an issue of great national importance" and raises separation-of-powers questions; (2) the First Circuit decision conflicts with the Supreme Court's 1972 decision in Baker v. Nelson and other appellate decisions; and (3) the First Circuit "invented a new standard of equal protection review."

In the course of the filing, called a petition for a writ of certiorari, BLAG states that "[t]he executive branch has … abdicated its traditional role of defending the constitutionality of duly-enacted statutes."

Boehner's fellow Republicans, Majority Leader Eric Cantor and Majority Whip Kevin McCarthy sided with the House Speaker. The group's two Democrats, Minority Leader Nancy Pelosi and Minority Whip Steny Hoyer, voted against petitioning the court, which must now decide whether or not to hear the case.

Speaking about the filing, Pelosi blasted Boehner and other Republicans, saying, "Democrats have rejected the Republican assault on equal rights, in the courts and in Congress. We believe there is no federal interest in denying LGBT couples the same rights and responsibilities afforded to all couples married under state law. And we are confident that the Supreme Court, if it considers the case, will declare DOMA unconstitutional and relegate it to the dustbin of history once and for all."