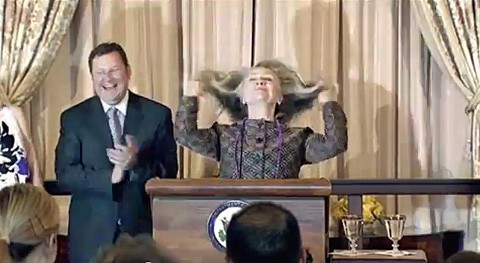 Secretary of State Hillary Clinton made a fashion statement last night at the swearing in of Assistant Secretary for Public Affairs Michael Hammer, ABC News reports:

Amidst a room full of   family, friends and colleagues, Clinton started her remarks by saying that the day was not only about Hammer but the color purple, well-known through-out the State Department as the assistant secretary’s favorite color.

“Mike, I was in a real dilemma,” joked Clinton. “I have pantsuits in nearly every color – except purple,” she said as the crowd clapped and laughed.

Clinton then turned to Hammer’s wife and daughters  and said that since they were all in purple, she needed to be “appropriately attired” as well.  The secretary of state proceeded to put on purple mardi gras beads and what she called her “piece de resistance,” wing-tipped purple and green sunglasses. 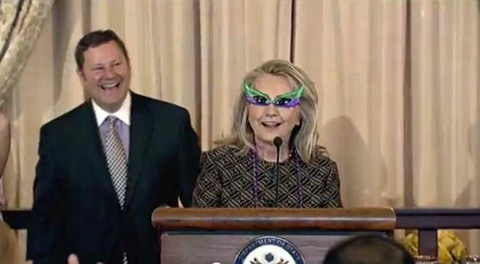