A federal judge has ruled that a Wisconsin man will not be able to distribute Bibles at the Minneapolis Pride Festival in the city's Loring Park, the Pierce County Herald reports. 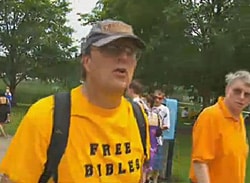 Brian Johnson of Hayward sought an injunction giving him unfettered access to the festival grounds.

But Chief Federal District Judge Michael Davis issued a 41-page ruling yesterday explaining why Johnson’s constitutional challenge is not likely to succeed. Davis said Johnson would have to confine himself to a booth just outside the event. His attorney from the Center for Religious Expression says his client is being relegated to a quote, 'no pride zone' where nobody will go – and therefore, his free speech rights are being violated. But the judge said the booth is right next to a picnic-and-entertainment area close to one of the park’s main entrances. Still, attorney Nate Kellum says he’s exploring other legal options to get Johnson inside."

Watch a report from CBS Minnesota, AFTER THE JUMP…

Video may take a few seconds to load in:

Previous Post: « Italian Footballer Antonio Cassano Hopes There are No ‘Queers’ on the National Team
Next Post: Senate Hears from First-Ever Transgender Witness as Kylar Broadus Testifies on ENDA: VIDEO »