Q: Mirror Mirror who is the fairest of them all? A: Charlize Theron, duh!

"Fairy tale revisionism" has been rapidly climbing the Hollywood Idea Chart. In the past few years we've seen Alice in Wonderland, Rapunzel in Tangled, Red Riding Hood, and Snow White in Mirror Mirror (reviewed here).  There are several more on the way including Angelina Jolie as Maleficent terrorizing Sleeping Beauty Elle Fanning. This weekend Snow White returned to theaters for the second time in three months. Her timing is apt since the apple-munching princess is celebrating her 75th big screen anniversary (Snow White and the Seven Dwarfs premiered in 1937). Why so many fairy tales? Modern Hollywood thrives on branding so the more familiar the movie before it arrives the better. And what's more familiar than fairy tales?

Oops wrong fairy tale. Regret to inform that SNOW WHITE AND THE HUNTSMAN does not have a theme song sung by Angela Lansbury but let's borrow that song anyway since its such an earworm. This new Snow White movie does have a theme song but it's a less catchy dirge-like ballad. One of the seven dwarves coughs it out at a funeral until Florence and the Machine take over on the soundtrack as the heroes rise up against evil Queen Ravenna (Charlize Theron) in montage.

But we're getting ahead of ourselves.

If you can suspend your disbelief that Kristen Stewart is "the fairest of all them all" in a beauty contest with Charlize Theron, READ ON AFTER THE JUMP… 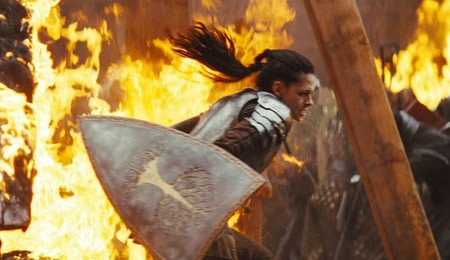 The movie insists that Ravenna's beauty is the product of dark magic but if movies are elaborate magic tricks than it’s definitely Kristen Stewart as Snow White that's benefiting from studio sorcery. The gifted new cinematographer Grieg Frasier (Bright Star, Let Me In) carefully shoots Kristen Stewart with warm magic hour light so that even when she's wet, beaten and terrified, her dark locks frame her half lit porcelain face just so; she’s never looked better. 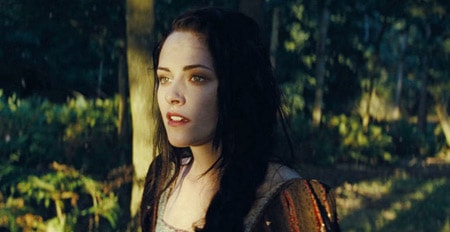 Barely even friends. Then somebody bends
Unexpectedly

To be fair to the film and the ladies in question, the screenplay muddies the water a bit with what the "fairest of them all?" question means. The question is about physical beauty until it's not; Snow White's innocence, purity and kindness are eventually directly equated with her "fairness". It’s almost as if the Magic Mirror is guiding the story and changing the rules, sabotaging the Queen. This makes one of the film’s last images, Snow White reflected in the evil artifact, a curious winner.

The rivalry between stepdaughter and stepmother is handled with more ambiguity than we usually get in these circumstances with a fair bit of sympathy for the devil. Snow implicitly senses Ravenna’s tragic backstory even though it’s only the Queen and her Lurch like brother (Sam Spruell) and the audience (via flashback) who know it. Otherwise though this princess's love stories are a touch too ambiguous. Does she love the Huntsman or her childhood Duke Charming (Sam Claflin)? The movie plays coy here, which adds a bit of intrigue to the “love’s first kiss” business but has an unfortunate effect on the movie’s heart, deromanticizing the iconic fairytale. Kisses are usually heroic in fairytales but any and all sexuality, even the purest kind, is as poisonous at that infamous apple this time around. 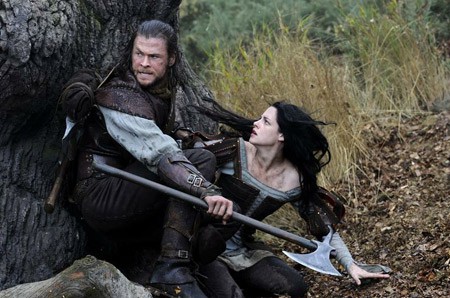 Just a little change. Small, to say the least
Both a little scared. Neither one prepared
Beauty and the Beast ♩

Point being: Snow White and The Huntsman is handsomely made and even pleasantly if unsuccessfully ambitious. This makes it the best of the recent live action fairy tales though that's not a tough bar to clear. The fairest of them all is the excellent costume design work on Theron’s mesmerizing Queen Ravenna (courtesy of three-time Oscar winner Colleen Atwood). But it takes more than costumes and one major diva actress to sell a movie. Especially when they’re sidelined from the main action.

Theron tries hard (too hard?) to revive the movie’s frequently failing heart with much needed shots of adrenaline but the movie’s relentless sobriety brings too many unintentional laughs. Most classic dramas aren’t shy about having a healthy sense of humor but when genre films want to be taken seriously they tend to err in the opposite direction. First time director Rupert Sanders uses Ravenna quite oddly reducing her to a walking visual effects ad to liven things up (briefly) during commercial breaks from the duller Snow White adventure. The storytelling gets as muddied as Snow White after escaping the castle through its sewers. Worst of all are the overhead aerial shots of the heroes recall The Lord of the Rings to such an absurd extent that it almost feels like stock footage with beefy Chris Hemsworth CGI'ed over Aragorn and new Dwarf faces superimposed over The Hobbits.

Ever just the same. Ever a surprise
Ever as before. Ever just as sure
As the sun will rise ♫

All in all this familiar but interestingly reworked fairy tale movie will play better on DVD where its choppiness will feel more organic to the viewing. There’s a lot of Beauty here and four actual beauties (Theron, Hemsworth, Stewart, and Claflin) but revising fairytales is a Beastly task. Queen Ravenna is right in her own sick way. It takes a strong beating heart for any story to achieve immortality. Snow White and the Huntsman’s heart beats faintly and arrhythmically, even when its body is shouting, fighting and otherwise magically engaged.