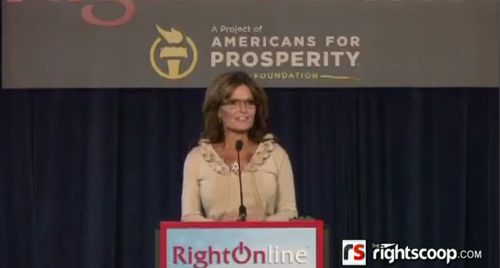 It would take a long, long essay to untangle all the inaccuracies in Sarah Palin's headlining address at the Right Online conference this weekend. (The most glaring, to this viewer, has to do with Barack Obama's energy policies, which have resulted in unprecedented energy independence for the United States — but never mind.) Suffice it to say: This is a woman who, despite having once majored in journalism, was incapable of naming an American newspaper less than five years ago, and who is now speaking authoritatively to a roomful of adulateurs about the future of media.

What's heartbreaking about Palin's address is the way she bluntly discounts the Americanness of those who disagree with her, and especially those who've actually taken to the street to protest voice those disagreements — say, when she visited Wisconsin to support embattled governor Scott Walker. Dissenters aren't people to be engaged: they're savage, sex-and-violence crazed thugs who must be combatted and expelled from the American conversation. It's internet-troll logic, improbably elevated into the highest heights of American political discourse.

And then there's this moment of pure class, during which Palin excoriates the American media for failing to "vet" Barack Obama in 2008:

Why did they at least not read his autobiography? They’d have a learned a whole lot. They’d have learned a whole lot, and not just about that pot smoking and that cocaine snorting and what he ate — Fido, Rufus. I think it is funny that the cocktail circuit circus gives me a hard time for eating elk and moose, but come on. There’s a difference. Anybody here have a pet moose? There’s a difference.

… except it's not the "cocktail party" circuit, and it's certainly not President Obama. It's the tabloids. And by having a go at Fido and coke, she's joined their cause.

Watch Palin's speech AFTER THE JUMP …