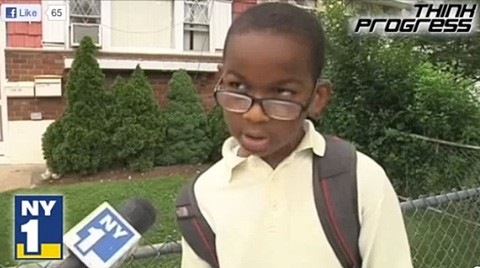 NY1 reports that a public school in NYC's Queens borough has prohibited a fifth-grade student from delivering an award-winning speech on same-sex marriage:

Kameron Slade worked on his speech with his mother and his teacher after winning a class competition. He was slated to deliver it in a school-wide contest at PS 195. That's no longer going to happen. His mother, who doesn't want to be identified, said the principal told her the topic is inappropriate.

"For him to be denied the right to voice his opinion really upsets me," she said.

"I was really looking forward to it," Kameron said. "I thought that this was a real good winning speech for tomorrow."

Kameron's mother said he was told to choose any topic, so he chose same-sex marriage. But on Wednesday, the principal said he should write another speech or be removed from the contest.

"She said that people have different opinions on it and that some parents may not want their children to learn about this type of topic," Kameron said.

Kameron's speech calls for acceptance and tolerance. It describes his mother's explanation of the issue and his impression of his mother's friends who are gay.

Watch Kameron recite his speech, AFTER THE JUMP… 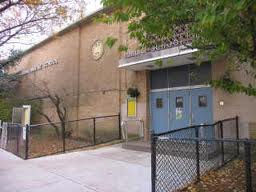 A partial transcript and clip (via Think Progress)

Some people are for same-gender marriage, while others are against it. Like President Obama, I believe that all people should have the right to marry whoever they want. Marriage is about love, support, and commitment. So who are we to judge? If we judge people like this, this is a form of prejudice. We must learn to accept all differences.[…]

My mom is very open to me about same-gender marriage. However, some adults may feel uncomfortable and think it’s inappropriate to talk about this to children. I think adults must realize that as children get older, they become aware of these mature issues that are going on in the world. If children read or watch the news, they can learn about things like same-gender marriage, so what’s the point in trying to hide it?

In conclusion, I hope that everyone understands how important it is to respect everyone for who they are. Same-gender marriage is becoming more popular. I believe that same-gender marriage should be accepted worldwide and that parents and teachers should start to discuss these issues without shame to their children.

Watch Kameron recite his speech, AFTER THE JUMP…