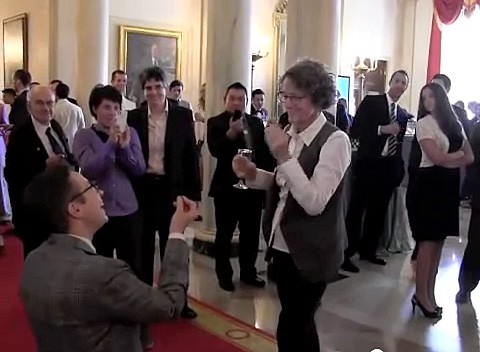 On Friday, the White House held an LGBT reception, Obama gave a rousing speech, and then a trans man proposed to his girlfriend:

"Scout, whose full name is legally one word, popped the question to Liz Margolies just minutes after President Barack Obama addressed the guests, many of whom are leaders in the LGBT community. Scout said he had been planning to propose to Margolies at the White House for almost a year, but when the moment presented itself, he realized he hadn't chosen a place to do it. So he just got down on his knee in the middle of Cross Hall, the main hallway on the first floor of the White House, where dozens of guests were sipping champagne and listening to the U.S. Marine Band."

Watch it go down, AFTER THE JUMP…