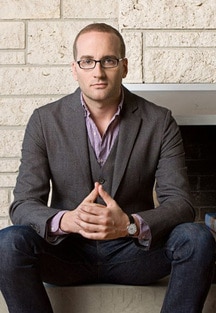 You may or may not know this, but Chad Griffin is the first southerner to head up Human Rights Campaign, the Washington-based LGBT activist group. And according to AP reporter Jeannie Nuss' profile on Griffin and his current work, growing up in Arkansas and its religious culture had a deep impact on the new HRC president.

Arkansas helped shape Griffin into the leader he is today: a man uniquely qualified to fight a civil rights battle that will be difficult, even after President Barack Obama came out in support of same-sex marriage this year.

As the first Southerner to head the Washington-based group, Griffin has a knack for translating the fight for gay rights into language familiar to people in the Bible Belt. He sometimes borrows phrases from the pulpit — brothers and sisters, God's children — to advocate equality for lesbian, gay, bisexual and transgender people.

"This is nothing more than the golden rule," Griffin told community leaders during his visit last month. "Treat others as you wish to be treated."

The article goes on to mention that Griffin was born in a town called Hope, which boasts former President Bill Clinton and former Arkansas Gov. Mike Huckabee as native sons, and that Griffin's work today is in large part influenced by the racial divides that exist in the state.

"If you remember those famous photos from the '60s and the civil rights movement, you didn't only see African-Americans marching down the street," Griffin told Nuss. "You saw them marching arm in arm with their white brothers and sisters."