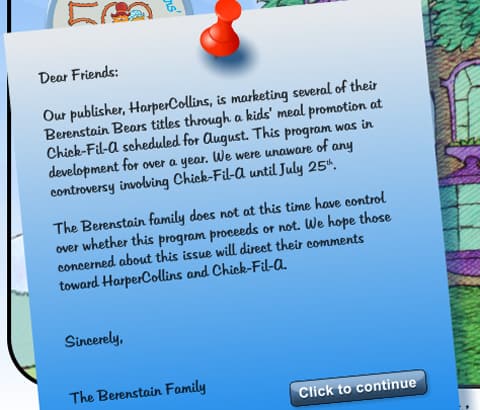 Following the Jim Henson Company's abrupt decision to end its relationship with Chick-fil-A over the company's anti-gay donations, the restaurant chain began offering a series of books from the Berenstain Bears series instead, which has apparently horrified The Berenstain Family.

They wrote a note on their website and Facebook page distancing themselves from the Kids Meal deal:

Our publisher, HarperCollins, is marketing several of their Berenstain Bears titles through a kids' meal promotion at Chick-Fil-A scheduled for August. This program was in development for over a year. We were unaware of any controversy involving Chick-Fil-A until July 25th.

The Berenstain family does not at this time have control over whether this program proceeds or not. We hope those concerned about this issue will direct their comments toward HarperCollins and Chick-Fil-A.

Ironically, the book reportedly being pushed in the Kids Meals is one that teaches the "Golden Rule".