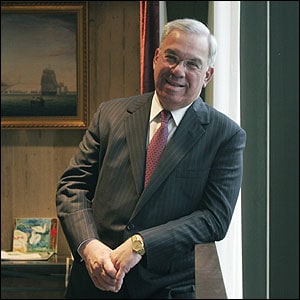 This week, Chick-fil-A president Dan Cathy said that the United States' gradual embrace of marriage equality is tantamount to "inviting God's judgment on our nation." In so saying, Cathy invited the judgment of Boston's Mayor Thomas M. Menino (pictured at right). From the Boston Herald:

[Mayor Menino] is vowing to block Chick-fil-A from bringing its Southern-fried fast-food empire to Boston — possibly to a popular tourist spot just steps from the Freedom Trail — after the family-owned firm’s president suggested gay marriage is “inviting God’s judgment on our nation.”

“Chick-fil-A doesn’t belong in Boston. You can’t have a business in the city of Boston that discriminates against a population. We’re an open city, we’re a city that’s at the forefront of inclusion,” Menino told the Herald yesterday.

“That’s the Freedom Trail. That’s where it all started right here. And we’re not going to have a company, Chick-fil-A or whatever the hell the name is, on our Freedom Trail.”

Chick-fil-A has long been linked with conservative causes, though seldom so controversially. This week's remarks accomplished what the company's previous Muslim-firings and gay-bashings couldn't, sparking enough backlash to evince a promise from Chick-fil-A execs to stay out of the culture wars from now on. Distinctly odd behavior for a company whose stated purpose isn't to make a profit, but rather "to glorify God." What will God make of Chick-filA's sudden meekness? Maybe Cathy et. al. aren't so pious. Maybe they just don't like gays.