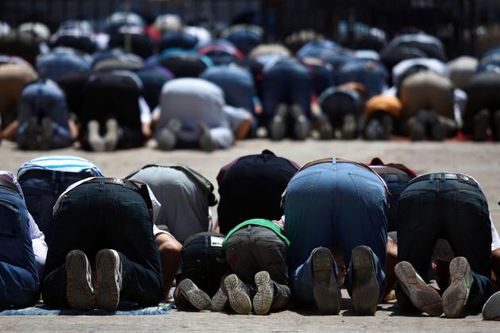 “As this is the Ramadhan fasting month, we need to strengthen our efforts,” … Sembiring told reporters at a press conference at the ministry on Wednesday.

Tifatul, known for his antics such as claiming he was “forced” to shake the hand of US First Lady Michelle Obama during a visit to Jakarta, said that the crackdown would focus on local Internet service providers (ISP).

[According to Ashwin Sasongko, the "director for informatics applications" at the Communication and Information Ministry,] the crackdown was launched for the benefit of Muslims, who were expected to refrain from sexual intercourse during daylight hours during Ramadhan, among other things.

“We are responsible for protecting the younger generation from consuming destructive pornographic content on the internet,” Ashwin said.

“This is really important especially ahead of Ramadhan. We hope that Muslims can fast peacefully,” Ashwin added.

At least one million pornographic websites have been blocked in Indonesia so far. There are at least one million more to go, according to te Communication and Information Ministry, though their math may be untrustworthy — the Ministry also claims to have received "at least" 100 million complaints about online pornography in the last year, which equals rather a lot of Indonesians Googling pages they don't want to see. (The year before, the Ministry reported just over 800 such complaints.)

The Global Post notes that some Indonesians have been unable to resist porn's evil allure, including at least one Indonesian in Tifatul Sembiring's own political party:

The Jakarta Post notes a Google report that Indonesia ranks third in the world in internet users seeking pornography, behind only China and, for some reason, Turkey.