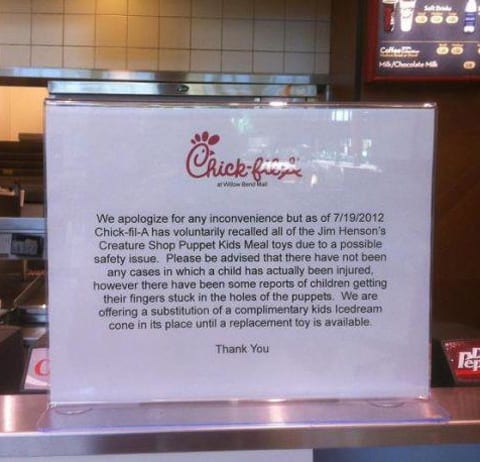 According to a photo published to the 'Wipe Out Homophobia" Facebook group, Chick-Fil-A has announced a voluntary recall of Jim Henson's Creature Shop Puppet Kids Meal toys, and is blaming it on safety issues. There's no information on when the notice was allegedly put up, but the "recall" is backdated to one day before the Jim Henson Company cut ties with Chick-Fil-A for its donations to anti-gay groups.

The notice says "Willow Bend Mall" which is in Plano, Texas.

"We apologize for any inconvenience but as of 7/19/12 Chick-Fil-A has voluntarily recalled all of the Jim Henson's Creature Shop Puppet Kids Meal toys due to a possible safety issue. Please be advised that there have not been any cases in which a child has actually been injured, however there have been some reports of children getting their fingers stuck in the holes of the puppets. We are offering a substitution of a complimentary kids icedream cone in its place until a replacement toy is available."

Coincidence? Perhaps they're worried the kids might touch something gay-friendly.