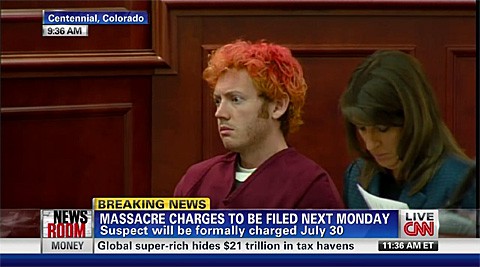 James Holmes, the man behind Friday night's murderous rampage, appeared in court moments ago looking completely out of it and deranged.

A prosecutor told the Associated Press this morning that Holmes could face the death penalty. Formal charges are expected to be filed on Monday. Eighteenth Judicial District Chief Judge William Sylvester entered a protection order, requiring Holmes not to have contact with victims or witnesses. He also sealed the records in the case.

Sylvester ordered Holmes held without bond. The purpose of the hearing, known as an advisement, was to tell Holmes about the murder charges on which he is currently being held. A formal filing of charges by the district attorney's office will come later. Prosecutors could add to or change his charges in between.