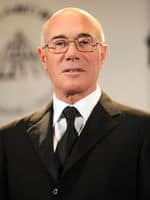 The Hollywood Reporter has a report:

Geffen, who is on tape suggesting "ego" isn't a "pejorative" term in his mind, insists he never saw himself as the smartest person in the room at any point during his career, revealing that he did poorly in school — “I thought I was dumb,” he said — and was fired from a number of early jobs coming out of high school. In fact, he said the only reason he had the confidence to go after a gig as a William Morris agent is because he believed it rewarded a different skill set, and one that he had: the ability to “bullshit on the phone.” Decades later, he’s enjoying his time away from the business – at 69, he said, he doesn’t “want a job” — and noted that he’s content spending weeks at a time lost in books and newspapers. (Other Geffen facts: He’s never carried a cell phone, has never texted anyone and doesn’t own an ATM card.)

If you’ve heard the one about Carly Simon suggesting her song “You’re So Vain” is about Geffen, he assures you it wasn’t. “Not that I’m not vain; I’m just not her vain,” he shrugged, adding that the one about him marrying Keanu Reeves – an actor he said he had never met at the time of the report — was similarly untrue.