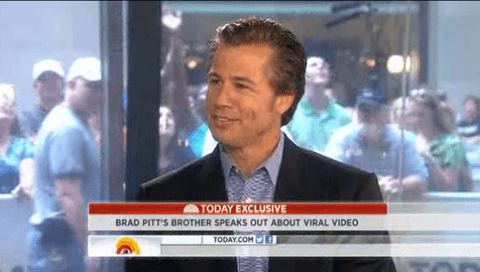 Doug Pitt, brother to actor Brad, showed up on The Today Show this morning to discuss his new Virgin Mobile Australia ad — you know, the one in which he plays himself, “the second most famous Pitt” — but the conversation soon turned to another Pitt, their newly infamous mother, Jane, and the anti-gay letter she published in the Springfield News-Leader last week.

Asked about the letter and its opposition to marriage equality, something Brad Pitt supports, Doug Pitt handled himself like a pro, simply saying that parents and kids can agree to disagree and that their family endorses health discussion.

“Moms and dads and kids agree to disagree all over the world, so why would our family be any different?” he told Matt Lauer. “There can be healthy discussion when people disagree with you, and I think there should be. The bad thing is when it turns into venom and negativity and we don’t have that in our family. It’s open discussion, we can learn from each other … maybe you learn something.”