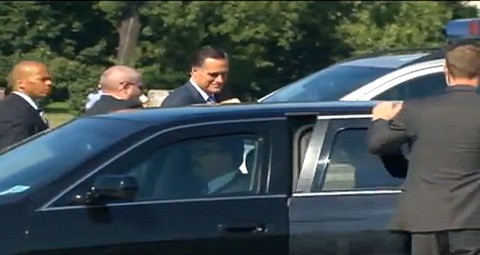 Mitt Romney's traveling Press Secretary Rick Gorka cursed at frustrated reporters today after they questioned Mitt Romney in a public plaza near the Tomb of the Unknown Soldier in Warsaw, CNN reports:

As Romney made his way to his vehicle, reporters attempted to shout questions to the candidate. The former Massachusetts governor, who has answered only three questions from his traveling press corps during a week-long overseas trip, ignored the queries.

NN: "Governor Romney are you concerned about some of the mishaps of your trip?

NYT: "Governor Romney do you have a statement for the Palestinians?

NYT: "Governor Romney do you feel that your gaffes have overshadowed your foreign trip?"

CNN: "Governor Romney just a few questions sir, you haven't taken but three questions on this trip from the press!

NYT: "We haven't had another chance to ask a question…"

Gorka: "Kiss my ass. This is a Holy site for the Polish people. Show some respect."