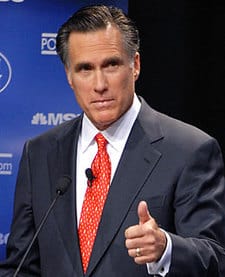 The Log Cabin Republicans today praised much Mitt Romney's ill-received speech at the NAACP's national conference, but criticized the GOP presidential hopeful for his "gratuitous attack" on marriage equality.

With his opening remarks to the NAACP today, Governor Romney sent a message that he recognizes the importance of an inclusive Republican vision for victory in November. He deserves credit for taking the step to include sexual orientation by name.

That said, it is unfortunate that he countered his outreach to gay and lesbian Americans with a gratuitous attack on the freedom to marry. If Governor Romney truly desires to represent all Americans, Log Cabin Republicans encourages him to avoid divisive social issues and focus on jobs and the economy.

Some are suggesting Romney intentionally threw in a "traditional marriage" remark to gin up controversy that will endear him to conservative voters.