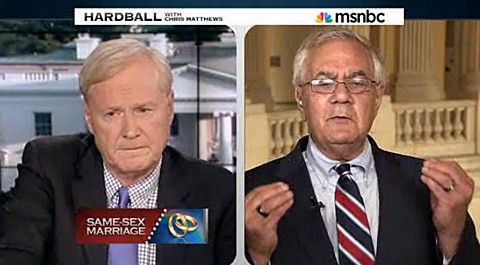 Chris Matthews and Barney Frank had a sharp exchange tonight on Hardball over what the Democratic Party's reported marriage equality plank would mean in terms of federal laws, with rank yelling "you're wrong!" at Matthews after he suggested that the Civil Rights Act contained precedent for federal law.

Matthews also argued that the marriage equality plank would hurt Obama in swing states in the upcoming election and warned that news of the addition would dominate headlines during the first days of the Democratic Convention. Frank believes everyone has already made their position known and it's a non-issue.