Mike Huckabee is defending Chick-Fil-A's anti-gay policies in a Facebook post in which he announces Chick-Fil-A Appreciation Day on August 1. 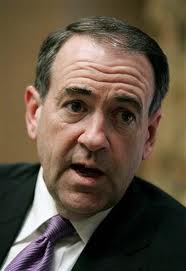 I have been incensed at the vitriolic assaults on the Chick Fil-A company because the CEO, Dan Cathy, made comments recently in which he affirmed his view that the Biblical view of marriage should be upheld. The Cathy family, let by Chick Fil-A founder Truett Cathy, are a wonderful Christian family who are committed to operating the company with Biblical principles and whose story is the true American success story. Starting at age 46 Truett Cathy built Chick Fil-A into a $4 billion a year enterprise with over 1600 stores. At 91, he is still active in the company, but his son Dan runs it day to day as CEO.It's a great American story that is being smeared by vicious hate speech and intolerant bigotry from the left.

The Chick Fil-A company refuses to open on Sundays so that their employees can go to church if they wish. Despite the pressure from malls, airports, and the business world to open on Sundays, they still don't. They treat customers and employees with respect and dignity.

I ask you to join me in speaking out on Wednesday, August 1 "Chick Fil-A Appreciation Day.” No one is being asked to make signs, speeches, or openly demonstrate. The goal is simple: Let's affirm a business that operates on Christian principles and whose executives are willing to take a stand for the Godly values we espouse by simply showing up and eating at Chick Fil-A on Wednesday, August 1. Too often, those on the left make corporate statements to show support for same sex marriage, abortion, or profanity, but if Christians affirm traditional values, we're considered homophobic, fundamentalists, hate-mongers, and intolerant. This effort is not being launched by the Chick Fil-A company and no one from the company or family is involved in proposing or promoting it.

There's no need for anyone to be angry or engage in a verbal battle. Simply affirm appreciation for a company run by Christian principles by showing up on Wednesday, August 1 or by participating online – tweeting your support or sending a message on Facebook.

Previous Post: « The Muppets Cut Ties with Chick-Fil-A Over Anti-Gay Policies
Next Post: Gay Wedding Video of the Day: Jeff and Joe »