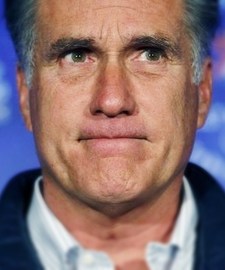 Mitt Romney popped into the NAACP’s national conference today to woo African-American voters. Telling the audience that he has the “best interest” of the entire nation in mind, Romney reportedly told the crowd he will stand for people of “every race, creed and sexual orientation.”

Later in the speech, though, Romney contradicted himself, saying, “As president, I will promote strong families and defend traditional marriage.” According to the Washington Blade‘s Michael K. Lavers, Romney’s remark was “soundly booed.“

Romney was again jeered when he claimed his administration would be better for African-Americans than President Obama, and then yet again when he vowed to repeal “non-essential” services like “Obamacare.” You can watch footage of those last two incidents AFTER THE JUMP.

Romney’s speech was an attempt to present his campaign as sympathetic to woes facing many black Americans. “If equal opportunity in America were an accomplished fact, then a chronically bad economy would be equally bad for everyone. Instead, it’s worse for African Americans in almost every way,” he said.

“Americans of every background are asking when this economy will finally recover — and you, in particular, are entitled to an answer.”

He also declared, “If equal opportunity in America were an accomplished fact, black families could send their sons and daughters to public schools that truly offer the hope of a better life. Instead, for generations, the African-American community has been waiting and waiting for that promise to be kept.”

Watch video of Romney being booed AFTER THE JUMP.