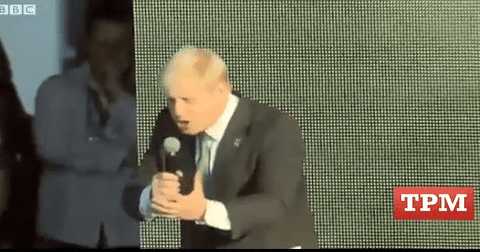 Mitt Romney's big sojourn abroad is not off to the most auspicious start. There was the awkward timing of Prime Minister David Cameron praising marriage equality just before Republican Romney arrived, and then there was the candidate himself. As you may have heard, Romney really stepped in "it" when he suggested this morning that perhaps London wasn't prepared for the Olympic Games, which start tomorrow.

"You know, it's hard to know just how well it will turn out. There are a few things that were disconcerting, the stories about the private security firm not having enough people, supposed strike of the immigration and customs officials, that obviously is not something which is encouraging," he said in an interview with NBC's Brian Williams. He later tried to clarify his remarks, saying he was "delighted with the prospects of a highly successful Olympic Games."

But the damage had been done, and it wasn't long before PM Cameron gave a back-hand to Romney's tenure as chief executive of the Salt Lake City Winter Olympics: "We are holding an Olympic Games in one of the busiest, most active, bustling cities anywhere in the world. Of course it’s easier if you hold an Olympic Games in the middle of nowhere."

And now London Mayor Boris Johnson has joined in on the fun by using Romney as a whipping boy in his speech before a cheering crowd: There are some people who are coming from around the world who don't yet know about all the preparations we've done to get London ready in the last seven years. There's a guy called Mitt Romney who wants to know whether we are ready. Are we ready?"

Romney next heads to Israel, but that's not until Saturday. He's attending the Olympics' opening ceremony tomorrow, meaning his comments will more than likely dominate the next few days of news coverage for a candidate trying to prove his diplomatic chops.

Watch Johnson's remarks AFTER THE JUMP…