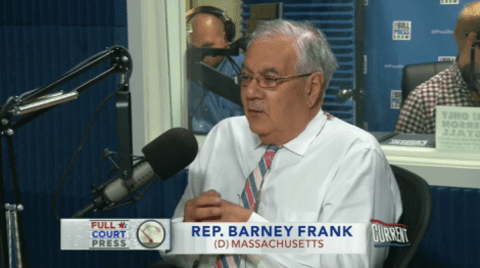 “I think we are winning the war against this prejudice,” he said. “I’m pretty optimistic” about future state wins because “clearly what works is that reality beats ignorance” and most citizens, after meeting LGBT people, can have their minds changed toward progress.

Frank was also asked about congressional reaction to his nuptials, a ceremony that makes him the first ever sitting member of Congress to enter a same-sex marriage.

While his fellow Democrats have been openly happy for him and some Republicans have “privately” congratulated him, Frank says most of the GOP has ignored it, and he thinks that’s a good thing because “there have been no negative comments.”

“The climate is changing and the opponents are realizing that the country is moving beyond them,” said Frank in the video, which I’ve included AFTER THE JUMP.

As for his and Ready’s honeymoon, Frank says the gents are jetting off to celebrate in August.