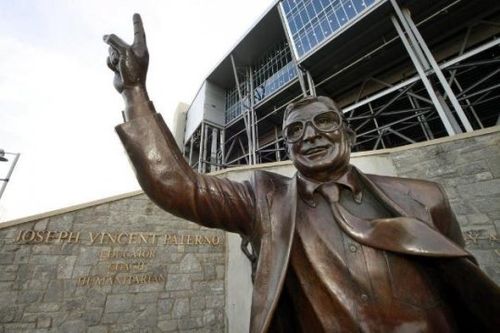 The NCAA came down on Penn State this morning with a hefty punishment for the football organization's despicable and tragic decision to look away as dozens of children were sexually abused:

"The NCAA imposed a $60 million sanction on the university, which is equivalent to the average gross annual revenue of the football program. These funds must be paid into an endowment for external programs preventing child sexual abuse or assisting victims and may not be used to fund such programs at the university. The sanctions also include a four-year football postseason ban and a vacation of all wins from 1998 through 2011. The career record of former head football coach Joe Paterno will reflect these vacated records. Penn State must also reduce 10 initial and 20 total scholarships each year for a four-year period. In addition, the NCAA reserves the right to impose additional sanctions on involved individuals at the conclusion of any criminal proceedings."