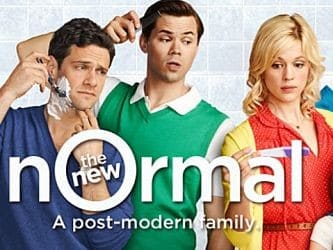 First it was JC Penney, and then Toys'R'Us, and then Green Lantern, The Gap, Kraft, Marvel Comics, and D.C. Comics — the anti-gay organization One Million Moms has ineffectually boycotted, or threatened to ineffectually boycott, more things than any ineffectual boycotters in recent memory. And they're back at it! Their current target: NBC's new sitcom, The New Normal.

To sum it up, this show is about a homosexual couple who hires a surrogate to have their baby. The season premiere is scheduled for Tuesday, September 11 at 9:30/8:30 p.m. Central. It is no surprise that openly gay Ryan Murphy, is one of the executive producers and director, who also brought us "American Horror Story," "GLEE," and "Nip/Tuck."

NBC is using public airwaves to continue to subject families to the decay of morals and values, and the sanctity of marriage in attempting to redefine marriage. These things are harmful to our society, and this program is damaging to our culture.

It is the case that consumers of all kinds of art, sitcoms to operas, are frequently exposed to sympathetic portrayals of characters they find unsavory, because the point of most art isn't to model some viewer's idea of utopia. Adults deal with it. And so do One Million Moms, most of the time. They're Christian, but they don't gripe about the atheists on The Big Bang Theory. They're probably very nice, non-violent, law-abiding citizens, but they don't gripe about the Soprano family. They only gripe about highly visible gays. Pretty weird.