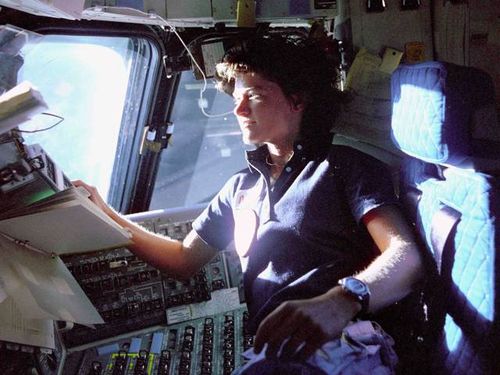 Before astronaut Sally Ride's obituary was released late yesterday, there had been no previous public acknowledgement that she was a lesbian, Terry McEntee, a spokeswoman from Sally Ride Science, told Chris Geidner at Buzzfeed.

With the simple statement that Ride was survived by "Tam O'Shaughnessy, her partner of 27 years", she was out.

"The pancreatic cancer community is going to be absolutely thrilled that there's now this advocate that they didn't know about. And, I hope the GLBT community feels the same," Bear Ride, who identifies as gay, said.

"I hope it makes it easier for kids growing up gay that they know that another one of their heroes was like them," she added.

Bear Ride told Geidner that she never hid her relationship with Tam, and that Sally's close friends knew: "Sally didn't use labels. Sally had a very fundamental sense of privacy, it was just her nature, because we're Norwegians, through and through."